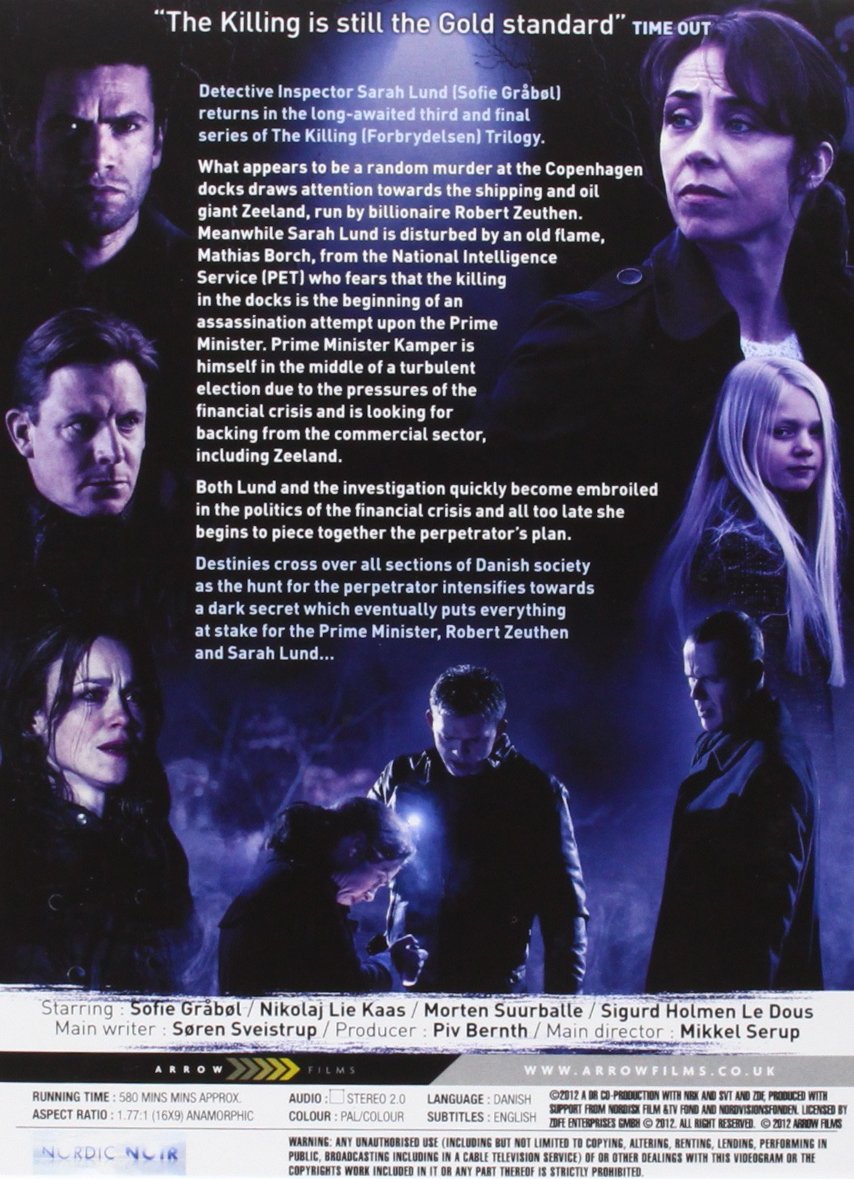 This is the entry for the Danish-language TV series known in English as The Killing. A tale of murder, politics and knitwear, Forbrydelsen (first season 2007, second 2009. Each episode of twenty focuses on one day in the investigation, from three. Spice Up the Subtitles: The official English subtitles for the first season. Watch Forbrydelsen Season 3 episodes online with help from SideReel. We connect you to show links, recaps, reviews, news and more.

Sofie Grabol as the detective Sarah Lund in “Forbrydelsen.” Credit Tine Harden/DR LAST June the first season of “The Killing” on AMC ended without a bang. A gun was pointed at a murder suspect’s head, and then there was a quick cut to the credits. The explosion came later, when complaints poured in that the show had failed to solve the season-long mystery the network had advertised with the teasing slogan “Who Killed Rosie Larsen?” In the wake of that cascade of ill will I had two thoughts. One was that if the show’s writers had wrapped up the story in that 13th episode, those same fans and critics would have complained — justifiably — that the season had been rushed and confusing and that the killer had been identified too abruptly. Free software download.

The second was that if you really wanted to know the answer, or an answer, all you had to do was watch “Forbrydelsen,” the Danish show on which “The Killing” was based. It revealed who killed Nanna Birk Larsen, Rosie’s European antecedent, way back in 2007. That’s what I did recently in preparation for Season 2 of the American show, which begins Sunday night on AMC. You can do it too, and legally, even though “Forbrydelsen” (“The Crime”) hasn’t been distributed in any format in America. A nicely packaged DVD set of the first season, with English subtitles, can be ordered online — it currently costs about $38 plus shipping from Amazon’s British site — and watched on a computer with a media player that ignores regional coding.

In the course of those 13 episodes the American show departed in many details from the original. Tomb raider congratulations you have successfully installed downloadable conten. But the similarities between the two — in premise, cast of characters and broad outline of the story — were much more pronounced. Watching “Forbrydelsen” it’s clear that despite the hedging comments of the American producers, it was ordained that “The Killing” would not solve its mystery in one season, and that it would need a full second season to wrap things up. And the division of the narrative arc into two seasons created problems for “The Killing” beyond the question of closure (which was really more of a marketing and publicity issue than a creative one). Much of the appeal of “Forbrydelsen,” a shrewd mix of police procedural, political thriller and domestic drama, comes from its classically shaped and steadily articulated structure. Three damaged characters — a detective, a mayoral candidate and the mother of a murdered girl — are caught up in a murder investigation, and they all, for their own reasons, are trying to solve the case, in ways that lead them to stymie and hurt one another. The mystery is absorbing and for the most part credible, but the real subject is the corrosive effect the case has on these people and their partners.

(Each has one: a fellow detective, a political adviser and a husband.) As the police focus on a seemingly endless series of suspects who turn out to be innocent, the investigation comes close to destroying each of the main characters. “The Killing” has all of those elements, but they couldn’t play out and build in a linear fashion over the course of 20 hours as they do in “Forbrydelsen.” The Danish show can get a bit slow and melodramatic at points — and clarity of structure does not make implausible coincidences more believable, it just makes them more obvious — but it offers a kind of formal, old-school satisfaction that the jumpier, more cryptic (as opposed to more mysterious) American adaptation has lacked. Mireille Enos plays a detective in “The Killing” on AMC. Credit Carole Segal/AMC Events may unfold at about the same pace in the two shows, but they seem to move faster and more chaotically in “The Killing.” Whether it’s the luxury of longer episodes or simply a matter of style, “Forbrydelsen” is full of interrogations, briefings and discussions that impart information and guide us through the story. “The Killing” reduced many of these scenes to curt exchanges or off-hand remarks delivered in passing.

Advertisement The need to readjust plotlines to fit into significantly shorter episodes was mirrored by the need for a season-ending climax at what represented the halfway point of the story. So it’s not surprising that the scene of Belko, family friend and employee of the Larsens, trying to assassinate the politician Darren Richmond was a wholesale addition, with no equivalent in the original. (The addition of the scene also suggests, for reasons that I won’t go into, that the American series might change the identity of the killer, a shift that wouldn’t be too difficult given the unusually large cast of characters and abundant red herrings.) The more deliberate, methodical storytelling of the Danish series also created a different environment for the actors. Not that “The Killing” was lacking in good performances: the cast, particularly Michelle Forbes and Brent Sexton as the grieving Larsen parents, was the best thing about it.