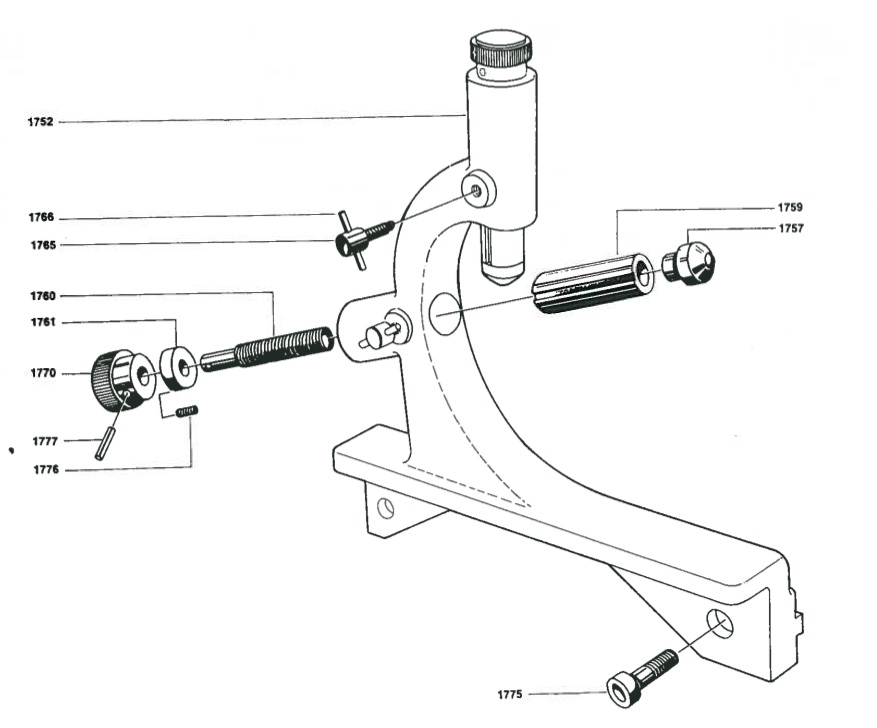 Archive: lathes.co.uk email: Graziano SAG Lathes - Italy Instruction, Maintenance & Parts Manuals for many SAG lathes Graziano machine tools were made in Tortona, Italy and although a wide range of lathes was manufactured, the company's most popular appears to have been the SAG 180, later to be sold as the improved SAG 14. The later version had a bed some 3/8' wider, much larger micrometer dials, a hand-operated bed and cross slide lubrication pump, top and cross slides in steel instead of cast iron, a micrometer-dial equipped carriage-traverse handwheel and other small modifications.

Designed as a high-class, precision machine (at an expensive £1048 in the late 1950s), the lathe was twice as costly as an English lathe of equivalent size yet, even so, found a ready market, especially in America, where several thousand were sold. With a 180 mm (7') centre-height, the lathe's had a bed that was flame-hardened and ground-finished with V-ways and constructed as a 'double-height' type - not unlike the arrangement used on some flat-bed Drummond lathes in the 1920s - with the carriage running on the covered lower ways and the tailstock on the higher (exposed) set. The arrangement provided a usefully deep 'gap', though without the usual weakening effect of a removable bed piece. Fitted with multiple, longitudinal carriage 'throw-out' stops as standard, the carriage had long and very wide swarf covers that extended right to the tailstock end of the bed - this latter detail, and the raised bedways, can also be clearly seen in the photographs at the bottom of this page. While the lathe was generally on a par with the contemporary Colchester Triumph, its nine speeds (obtained through gears made from heat-treated and ground nickel-chrome steel forgings) were rather more useful, running from 45 to 1500 rpm or, optionally, 54 to 1800. With a 2-speed motor sixteen speeds from 30 to 1200 rpm could be obtained and the makers offered the facility to vary the top and bottom speeds by fitting different sizes of pulley. The motor was a 5 h.p.

Unit (with electrical control by a 'third shaft' operated by a lever pivoting from the right-hand face of the apron) with the spindle arranged for instant reverse through a double friction clutch (though not all models may have been so equipped). Usefully, the spindle start, stop and reverse could be operated from controls on the apron as well as the headstock. Equipped with a D.1-5' nose, the 2-inch bore spindle of the early 180 ran in plain bearings at the front - with bearings at the rear consisting of two axial thrust type and one parallel roller bearing. Any thermal expansion of the spindle went towards the tailstock through a split phosphor bronze bush held in a conical taper housing - by which means it could be drawn in and the clearance adjusted. Later-model 180s had three English-made 'Gamet' high-precision bearings were and the spindle bore increased in size to 2.25 inches - changes carried over to the next model, the SAG 14.

Posted on December 7, 2015 Adidas, Argentina, France, Germany, National Team, Spain. The font set used by Adidas teams for World Cup 2006 in Germany. Used by Germany, France, Argentina, Spain, and another adidas teams. This font is available in TTF and OTF files. Compatible with Windows and Mac OS. TTF/OTF font is one-layer font. Easy to use with just typing on your keyboard. Archive of freely downloadable fonts. Browse by alphabetical listing, by style, by author or by popularity. Adidas 2006 Free Font The best website for free high-quality Adidas 2006 fonts, with 19 free Adidas 2006 fonts for immediate download, and 10 professional Adidas 2006 fonts for the best price on the Web. Font adidas 2006 font free.

While the bushed spindle had a large notched threaded collar to adjust the bearing clearance, the Gamet-bearing equipped machines can be identified by a bevelled collar held on with socket head-cap screws behind the D1-5 spindle nose. One other change on later models was the deletion of a useful cast iron raiser block that bolted directly to T-slots at the rear of the cross slide - the block accepting custom-tool holders by Rapid of Italy. Screwcutting and feeds was by a dual metric/inch fully-enclosed, all-lever gearbox (there were no openings to admit swarf or dirt) with initially, a 3-range A-B-C selection that was later increased to a 5-range A-B-C-D-E.

Type Late-model lathes had a 3/8'-pitch leadscrew, early ones a 1/2'. Generously equipped for a 1960s model, the 180 had, as part of its standard equipment, a 12' independent 4-jaw chuck, fixed and travelling steadies, a Herson quick-change toolpost, coolant and spanners. As Graziano subjected the machine to continuous improvement, it is difficult to be specific about changes to the design; however, in summary, there were at least two versions of the SAG180: a 2' bore plain-bearing spindle with an 'A-B-C' screwcutting gearbox and a 1/2' pitch leadscrew, then a type with a Gamet bearing, 'A-B-C-D' gearbox with a 3/8' leadscrew. However, there may have been a third, or at least a maker's variation on specification (possibly to use up spare parts) - a 1978 SAG180 being found in the US with the A-B-C-D-E gearbox and a 2.25' spindle bore (thus being, in effect, a SAG14 labelled as a SAG180). The history of the Graziano concern is rather complicated: a Maho Graziano brochure dated 1989 says that in 1987 Graziano S.p.A was acquired by Maho AG and became Maho Graziano SPA.